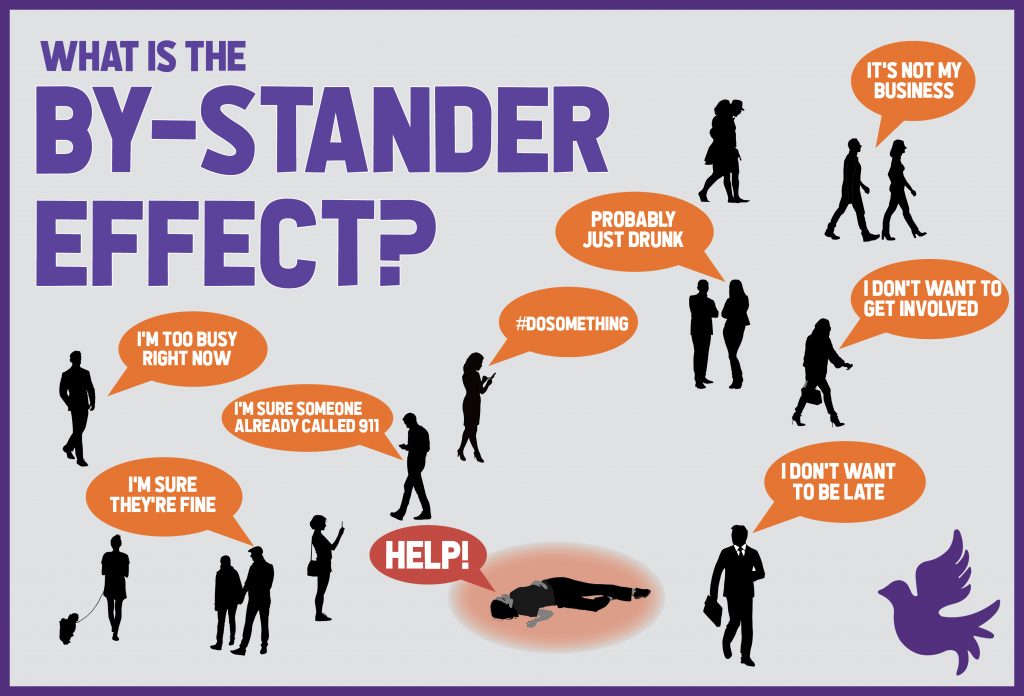 Can you imagine watching a man attack, rape and kill a young woman for an hour and a half and do nothing? Your immediate reaction is probably ‘Absolutely not!’

What if you were in an apartment building and the violence was so obvious you just figured someone else would have already called the police, so you didn’t call them.

Believe it or not, this is exactly what happened in 1964 when 38 adults witnessed the assault and murder of Kitty Genovese and did absolutely nothing to help. What those 38 adults participated in is now known as the by-stander affect.[1]

The bystander effect occurs when the presence of others discourages an individual from intervening in an emergency situation. Researchers attribute the bystander effect to the perceived diffusion of responsibility (onlookers are less likely to intervene if there are other witnesses who seem likely to do so) and social influence (individuals monitor the behavior of those around them to determine how to act).[2]

“Our lives begin to end the day we become silent about things that matter” -Dr. Martin Luther King Jr.

The By-stander Effect as it relates to Sexual Violence

Sexual Violence can be a difficult topic to understand or intervene in because of its sensitive nature. However, the more we are aware of sexual violence behaviors we increase our chance as a community to discourage victim blaming, change social norms, and engage our community more responsibly.

Understand the continuum of sexual behaviors below.

Typically, when we think of intervening to stop sexual violence, we think it will be when we witness child sexual abuse or rape. However, there are typically many indicators of increasing sexual violence that lead to these extreme acts. Little comments, harassment and other forms of abuse.  This is why it is important to intervene when behavior begins to feel inappropriate, coercive and harassing. Each situation is an opportunity to take action before it turns into further sexual violence.

What would you do in this Scenario?

It’s Friday night and you are walking by the local movie theater with a group of friends. A male friend of your spots a beautiful woman. He make some loud comments about her body and starts to hassle her.

Some perspectives that may arise or could be pointed out to the group including:

Consider when to intervene: since the perpetrator is a friend of yours, you have the chance to intervene immediately, later in the evening, or even the next day. The situation does not seem to impose an immediate danger. If your friend is drunk you may not be able to reach him effectively unless you wait until he is sober.

Acknowledge the situation: if you decide to wait to talk with your friend, you can still acknowledge that impact on the woman. Have someone in your group steer your friend away while another apologizes to the woman for the harm caused. You can also let her know that the behavior will be addressed at a later time.

Have the Conversation: Think about the best person in your group to talk with a friend; it should be someone who cares about him and understands the impact of his actions. Begin by telling your friends you care about him. Then let him know that because you care, you are talking about the impact of his behaviors. Then describe his specific behaviors and how those behaviors make you feel. Lastly, point out how it might feel if they were directed at someone he loves. [1]

At some point in all of our lives we have missed an opportunity to stand up for someone or we were silent when we shouldn’t have been. Take this as a learning experience and move forward to help combat sexual violence through speaking up, intervening and taking action when behaviors are inappropriate. Together we can create a community where our friends, family and community stick up for each other in times when we need them