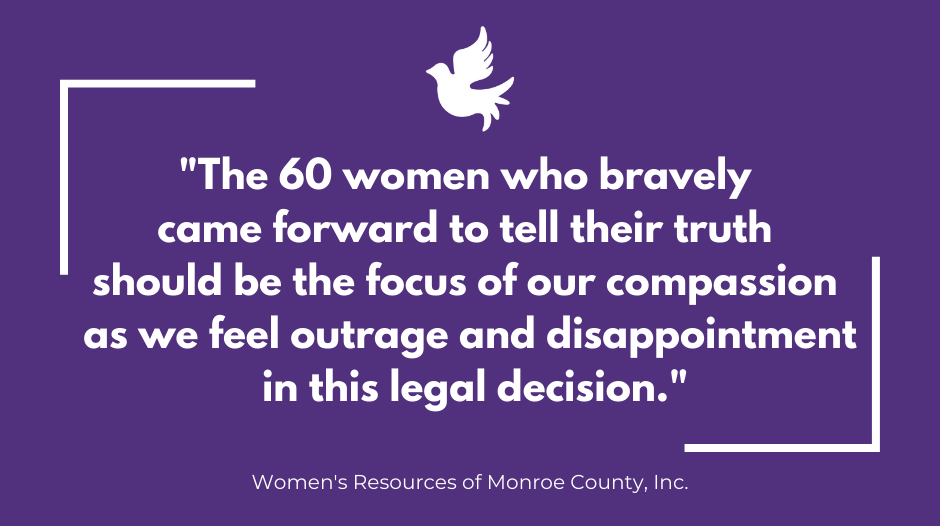 We at Women’s Resources of Monroe County are saddened, outraged, and disheartened on behalf of all sexual assault survivors following the decision made by the Pennsylvania Supreme Court to overturn the sentencing of Bill Cosby’s 2018 conviction on three counts of aggravated indecent assault.

It is important to stress that while Mr. Cosby has been freed from prison it was not due to any new evidence. It was because of a prior legal agreement’s impact on the trial and there was never any doubt of his guilt. Mr. Cosby's sentence was not overturned because he's innocent, but because of a previous deal between him and a DA in 2005, in which he admitted to drugging women in a deposition. He is not exonerated.

The State Supreme Court’s decision reflects the many challenges survivors face when they choose to come forward and share their stories of sexual harassment, abuse, and assault in search of justice. Often, multiple victims must speak up before sexual assault allegations are taken seriously. In this case, the outcome has an incalculable impact on survivors of sexual abuse across the country, many of whom are feeling outraged, re-traumatized, and devastated. When there are people like Cosby who sexually abuse others and are not held accountable, it sends the message that sexual assault and its impact on victims is not taken seriously.

The 60 women who bravely came forward to tell their truth should be the focus of our compassion as we feel outrage and disappointment in this legal decision. This ruling does not invalidate the pain the victims have gone through, and will continue to experience throughout their lives. Nor does it diminish the progress made during the #Metoo movement. We continue to support Andrea Constand and all the women who courageously took the stand during Cosby’s trial to tell the truth and help the jury understand the manipulation and behaviors Cosby used to assault his victims. We support all survivors in their journey to heal and continue to advocate on their behalf.

If you, or someone you know, is a victim or survivor of sexual abuse, sexual assault, rape, harassment, or other forms of violence – either as a child or an adult – it is important to know that you are not alone and it is not your fault. Women’s Resources is here for you, 24-hours a day 7 days a week: 570-421-4200.

Women’s Resources of Monroe County has provided services to victims of domestic and sexual violence and their families for over 40 years. Those services include safe emergency shelter, 24-hour crisis hotline, counseling, prevention education, legal advocacy, and community outreach. ANYONE, regardless of age, race, gender identity, sexual orientation, socio-economic status, etc., who has been a victim or family member of a victim can be eligible for these FREE and CONFIDENTIAL services.  The 24-hour hotline can be reached at 570-421-4200. To learn more about Women’s Resources of Monroe County please visit www.wrmonroe.org.