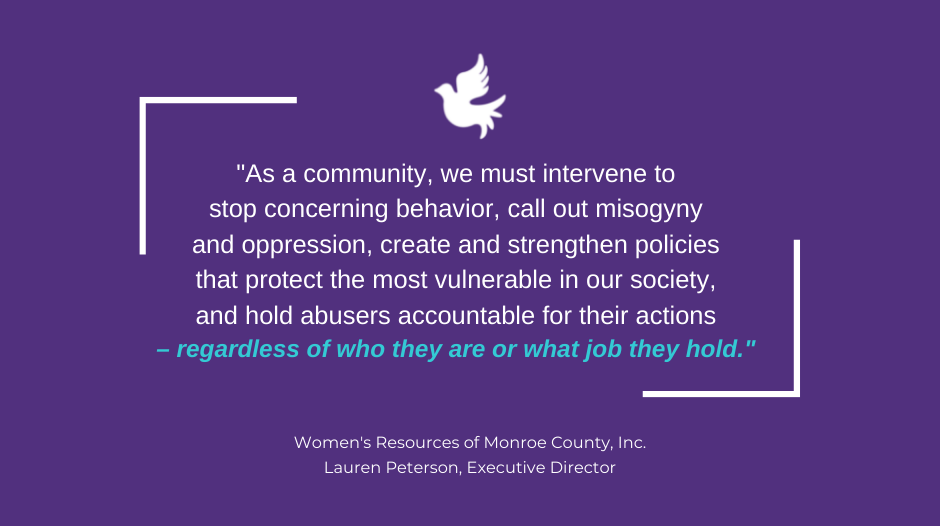 Delaware Water Gap, PA – We are disheartened and frustrated on behalf of all survivors following the outcome of a trial earlier last week where a former police officer was found not guilty of using his position of authority and power to rape a woman who, in his own words, was obviously inebriated and over the legal limit of alcohol consumption to drive. The verdict from the jury reflects the challenges sexual assault survivors face when they come forward in hopes of seeking justice, to share their experiences of sexual harassment, abuse, and assault in the criminal justice system.

More often than not, in cases of sexual assault, alcohol or some other substance is involved. Intoxicants are used strategically by people who commit acts of sexual violence to render their intended victims pliable, less likely to resist and can increase the possibility of memory gaps, which may increase doubts about their own memory and make it more difficult to accurately report what happened to them. When alcohol is consumed, it can render a person incapable of giving consent. People who commit acts of sexual violence know that someone who is intoxicated will have less control of their body and surroundings, sometimes even losing consciousness, which makes consent impossible.

Sexual assault or abuse is often about power and control. Whenever one of the parties involved has either a powerful position in law enforcement, government, money, or the ability to affect ones educational or societal goals, the person who is committing the abuse has substantial power over the other. These are tools those who abuse others use to get a victim to do what they want and keep the abuse a secret. Frequently, those who are selected by the person who abuses them are targeted because they would be unlikely to be taken seriously if the abuse ever came to light. Perhaps the abuser has more power, is better known, or is viewed as an authority figure. There are those that abuse others and take advantage of the role they may have with the victim, in this case a position of authority as a law enforcement figure, to ensure their cooperation and coerce them.

April is Sexual Assault Awareness Month, a time when we as a community stand together to support survivors, challenge myths and misconceptions, to teach and learn about how we can best respond to those who have been hurt and traumatized by sexual violence. On April 14th there will be a Take Back The Night March from Dansbury Depot in East Stroudsburg at 5:30PM, participants will march in solidarity with survivors of sexual assault and vocally call out the change we need to see in the world. Women’s Resources offers training and information sessions that are available to law enforcement and other groups on proper conduct, victim reactions and responses, trauma-informed approaches, and responding effectively to victims.

As a community, we must intervene to stop concerning behavior, call out misogyny and oppression, create and strengthen policies that protect the most vulnerable in our society, and hold abusers accountable for their actions – regardless of who they are or what job they hold. Most importantly, we must support survivors by believing them and helping them to find the resources they need to move forward.

If you, or someone you know, is a victim or survivor of sexual abuse, sexual assault, rape, harassment, or other forms of violence – either as a child or an adult – it is important to know that you are not alone and it is not your fault. Women’s Resources is here for you, 24-hours a day 7 days a week: 570-421-4200.

Women’s Resources of Monroe County has provided services to victims of domestic and sexual violence and their families for over 41 years. Those services include safe emergency shelter, 24-hour crisis hotline, counseling, prevention education, legal advocacy, and community outreach. ANYONE, regardless of age, race, gender identity, sexual orientation, socio-economic status, etc., who has been a victim or family member of a victim can be eligible for these FREE and CONFIDENTIAL services. The 24-hour hotline can be reached at 570-421-4200. To learn more about Women’s Resources of Monroe County please visit www.wrmonroe.org.